We are happy to announce the 6th DATEX II Forum will be held on the 25th and 26th of November 2020 at the Fédération Nationale des Travaux Publics in Paris, France! 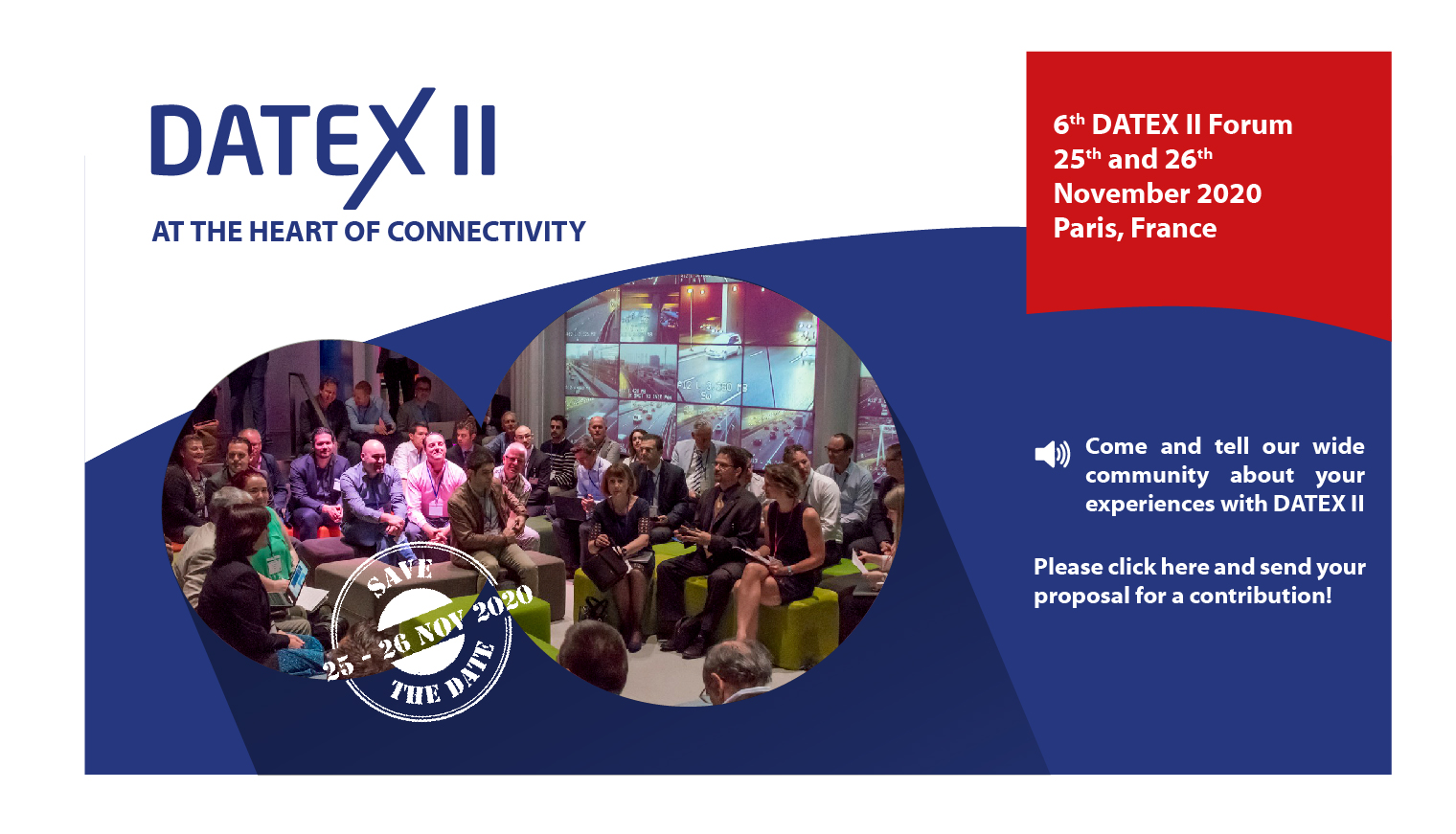 Please refer to any of the pages linked below for more information about this year’s DATEX II Forum.

You have come to the right place for information on DATEX II. The standard for the exchange of traffic related data.

This website is gradually growing, visit often to benefit from updates as soon as possible.

Enabling the Traffic Services of Tomorrow

Together, DATEX II and TN-ITS are taking on the challenge of interoperability of standards in the traffic management domain. By taking small steps, with a coalition of the willing, we aim to start improving the current situation. The focus in the first stage will be on developing semantical interoperability between DATEX II and TN-ITS within the scope of Management of Electronic Traffic Regulations (METR).

As part of the last DATEX II Steering Group meeting held in Athens, Vasilis Mizaras, senior ITS expert from the Centre for Research and Technology Hellas - Hellenic Institute of Transport, made a presentation explaining the status and prospects of the DATEX II deployment of ITS in Greece.

One of the sessions at the 2019 Digital Transport Days in Helsinki focused on (the future of) National Access Points in Europe: ‘Building a data layer: Network of national (data) access points -NAP’. The idea of launching a bottom-up group of NAPs and National Bodies (NBs) was presented by EU EIP expert Timo Hoffmann, with the goal to exchange knowledge and experiences, common approaches, data standards, how to get data from international organisations, etc.

We are happy to announce that DATEX II schema generation tools (web and windows) are updated with JSON schema support.
In the tools it’s now possible to choose to generate schema as either XML schema or JSON schema.
Since there is still some ongoing work, the JSON schema support has been given the status Release candidate.
More info about how to access the tools at http://d2docs.ndwcloud.nu/downloads/modelv30.html

Parts 4 (VMS) and 5 (Measured and elaborated data) of the DATEX II standard EN 16157 are now entering CEN “enquiry” – the last stage at which technical comments can be made, through national standards bodies. Comment resolution will allow a DATEX II release (referred to as 3.1) in Spring 2020 to include the version 3 forms of VMS and RoadTrafficData namespaces. Due to the modular approach of DATEX II version 3, users shouldn’t think in terms of supporting v3.0 or v3.1 or any specific v3.X, but rather supporting v3 with a selection of modules (technically “namespaces”). Each release 3.X will increase the number of modules available.